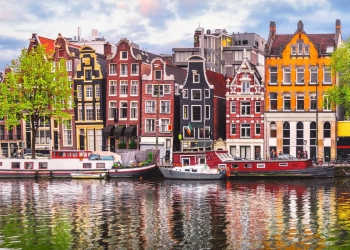 This Trip invites you to visit one of the Seven Wonders in North India which known by Tajmahal is ....

Singapore is a popular Asian country amongst tourists, from India. Singapore offers many sightseeing....

Nepal tour package takes you to one of the most picturesque capitals in the world with the aroma of ....

The U.S. is a country of 50 states covering a vast swath of North America, with Alaska in the northw....

Arrival in Amsterdam and later check in to the hotel. Rest of the day will be at your leisure to take a rest after a long flight journey. Amsterdam is the Netherlands’ capital, known for its artistic heritage, elaborate canal system and narrow houses with gabled facades, legacies of the city’s 17th- century Golden Age. Its Museum District houses the Van Gogh Museum, works by Rembrandt and Vermeer at the Rijksmuseum, and modern art at the Stedelijk. Cycling is key to the city’s character, and there are numerous bike paths.

Discover the delights and history of Zaanse Schans and the Dutch countryside on a trip from Amsterdam with an informative guide, admire the lush, canal- crossed Dutch landscape. Take a tour of pretty Zaanse Schans, famous for its wooden windmills and green- painted houses, and visit a cheese farm and clog- making workshop to learn about these traditional crafts. later, visit a working windmill to learn how these waterside factories helped drive the 17th- century Dutch Golden Age. Lastly, enjoy the guided Amsterdam city tour, Experience the Amsterdam’s social life, popular shopping areas. The highlights of your tour will be Dam Square, the Royal Palace and the beautiful Amsterdam canal belt, the Red Light District, the Anne Frank House, the Old Church, the famous Bijenkorf department store and the historic stock exchange building. Later we will proceed to Indian restaurant for dinner.

Check out and board your coach and we will drive towards Paris via Brussels, In Brussels enjoy Brussels orientation sightseeing tour, including sights such as the Grand Place and its famous guild houses, Royal Park, Royal Palace, The City Museum, Town Hall, Manneken Pis, Palace of Justice and Museum of Fine Arts and a photo-stop at the Atomium. It was built in 1958 World Fair and has since been symbolic to Brussels. Laterwards we will proceed to Paris. France's capital is a major European city and a global center for art, fashion, gastronomy and culture. Its 19th-century cityscape is crisscrossed by wide boulevards and the River Seine. Beyond such landmarks as the Eiffel Tower and the 12th-century, Gothic Notre-Dame cathedral, the city is known for its cafe culture and designer boutiques along the Rue du Faubourg Saint- Honoré.

This morning start your day with Guided Paris city tour to see popular sites like place de la Concorde, Arc de Triomphe, Notre Dame de Paris, Louvre Pyramid, Musée d'Orsay, Palais Garnier Opera, Champs Elysees Street, Concords Square, a journey to the 2nd floor of the Eiffel Tower for breath-taking views and many other historic buildings. Later enjoy a cruise on River Seine. This Paris city tour will allow you to discover the habits of Paris people and how they perceive their own city. While visiting the main neighborhoods of Paris, you will admire the architecture of Paris that evolved along the years, and you will find your bearings there.

Check out and board your coach to drive to Switzerland. On your way you will make a stop at Geneva. Switzerland is a mountainous Central European country, home to numerous lakes, villages and the high peaks of the Alps. Its cities contain medieval quarters. The country is also known for its ski resorts and hiking trails. Banking and finance are key industries, and Swiss watches and chocolate are world renowned. Upon Arrival, enjoy the orientation of Tour of Geneva. Later in the evening enjoy dinner in an Indian Restaurant and later check in at the hotel.

After breakfast, proceed to Montreux for photoshop stop and on the way orientation view of Vevey. Later proceed to Engelberg town- a base cable car station of Mt. Titlis. The TITLIS ROTAIR revolving gondola transports you easily to the mountain station. Take your time and visit the Swiss Watch shop, the world's highest watch shop. You can even have your photo taken in traditional Swiss costume in our photo studio at an additional cost. The glacier cave is only a snowball's throw from the mountain station. The glistening, blue ice tunnel leads deep down into the fascinating world inside the glacier. In the summer months, the Ice Flyer chair lift will take you to the glacier park where all kinds of fun snow activities await. Grab a snow tube or a speedy sled and whiz down the piste, whipping up plenty of snow as you go. You may also do the Titlis Cliff Walk is a pedestrian bridge along the cliff of Mount Titlis in the Swiss Alps. Later, in the early evening, proceed to Lucerne for Orientation tour and see the Chapel Bridge-The Chapel Bridge is a covered wooden footbridge spanning diagonally across the Reuss River in the city of Lucerne. Named after the nearby St. Peter's Chapel, the bridge is unique since it contains a number of interior paintings dating back to the 17th century, Jesuit Church- This beautiful church is considered to be the first large baroque style church ever built in Switzerland. Later in the evening we will have dinner at an Indian restaurant and later check-in to the hotel.

After the breakfast board the coach and proceed to Landquart Fashion Outlet. Here we will spend some leisure time for shopping and lunch; perhaps one can buy Swiss Chocolates too. Later we will proceed to experience the Scenic Train Ride (UNESCO Heritage Route ), while enjoying the panoramic views of the nature. Later in the late evening travel to Zurich for the orientation city tour.

After breakfast at the hotel, we will head towards Rhine Falls to see the panoramic views of the Hightest waterfall in Europe and Later Proceed to Wattens to take the vision of the noteworthy collection of world-famous Crystals in Swarovski museum. You will also get surprised to see 'Chetak' the favourite horse of Maharaja Rana Pratap of Rajasthan- ornamented with Swarovski's Gemstone Jewels. You will be provided with your time to shop for jewellery and other souvenirs for your friends and relatives as a symbol of love and remembrance of this exotic place. On Arrival Innsbruck, Orientation tour of Innsbruck capital of Tyrol Province, you will cover the Golden Dachl –Maria Theresa square, Imperial Palace, the Golden Roof, River Inns, and Royal Church etc. Later we will have dinner at Indian restaurant and later proceed for Check- in to the hotel.

After Breakfast. Check out and board your coach for Continue journey to Venice. On Arrival in Venice You will have panoramic tour of Venice, you will enjoy Vaporetto ride which will descend you to the Venice Island. Discern the "real Venice" by inflowing a knot of slender passages and lanes where this enchanted city of mean daring seaways dispersed by subtle bonds which expects you. Here at San Mark's square you will observe and learn the history that lies behinds the walls of its most famous landmarks; the Basilica and its Byzantine heritage, the Doge's Palace and its contiguous prisons, Venation, St. Mark Cathedral, Bell Tower with Bridge of Sighs, etc. Later proceed to Padova for dinner in an Indian restaurant. Later check-in to the hotel.

After Breakfast. Check out and proceed to Pisa to visit the Field of Miracles. Witness the flawless Baptistery & Leaning Tower of Pisa (photo stop), which had been able to make its way in the seven Wonders of world. The Leaning Tower of Pisa or simply the Tower of Pisa is the campanile, or freestanding bell tower, of the cathedral of the Italian city of Pisa, known worldwide for its nearly four- degree lean, the result of an unstable foundation. The tower is situated behind the Pisa Cathedral and is the third-oldest structure in the city's Cathedral Square, after the cathedral and the Pisa Baptistry. Later continue your journey to Florence, a home to many masterpieces of Renaissance art and architecture. On Arrival in Florence we will do walking tour of Florence. We will see the Duomo of Florence the largest brick dome ever created, along with photo shops at Basilica of Santa Croce, the final burial place of Michelangelo, statue of David replica famous Ponte Vecchio Bridge on the Arno River and the Piazzale Michealangelo. Later enjoy delicious cooked dinner and check in to the hotel.

After Breakfast. Check out and board your coach to the Eternal city of Rome. On Arrival Rome enjoy guided city tour of Rome with the stopover at Vatican City tracked by a photo stop at the grand remnants of the Forum & other monuments of ancient Roman rulers and the Colosseum. Visit Trevi Fountain- The Trevi Fountain is a fountain in the Trevi district in Rome, Italy, designed by Italian architect Nicola Salvi and completed by Pietro Bracci. Pantheon- The Pantheon is a former Roman temple, now a church, in Rome. Piazza Navona- Piazza Navona is a piazza in Rome, Italy. It is built on the site of the Stadium of Domitian, built in the 1st century AD, and follows the form of the open space of the stadium., Spanish Steps- The Spanish Steps are a set of steps in Rome, Italy, climbing a steep slope between the Piazza di Spagna at the base and Piazza Trinità dei Monti, dominated by the Trinità dei Monti church at the top. Piazza di Spagna- Piazza di Spagna, at the bottom of the Spanish Steps, is one of the most famous squares in Rome. Later enjoy the dinner in an Indian restaurant and proceed to check-in to the hotel.

Enjoy the delicious cooked breakfast, and later transfer to the airport.

INR 30, 000/- Per Person will be cancellation charges NON REFUNDABLE (If Visa get approved).

Paris, France's capital, is a major European city and a global center for art, fashion, gastronomy and culture. Its 19th-century cityscape is crisscrossed by wide boulevards and the River Seine. Beyond such landmarks as the Eiffel Tower and the 12th-century, Gothic Notre-Dame cathedral,
Rome, it is also the country's most populated comune. It is the third most populous city in the European Union by population within city limits.